'The officer, who has not been identified, approached and saw that the naked man was actually chewing the other man’s head, according to witnesses. The officer ordered the naked man to back away, and when he continued the assault, the officer shot him. The attacker continued to eat the man, despite being shot, forcing the officer to continue firing. Witnesses said they heard at least a half dozen shots.'
Wonder if one was a head shot.

Thanks to Mark for this, :)

I was reading the papers today and I noticed a disturbing figure.

Ciavarella's attorneys, Flora and Ruzzo were paid $75 per hour by the government 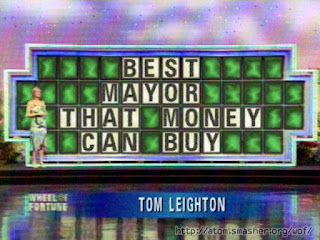 I also have to wonder about the "$8 million would come off the top to retire remaining indebtedness on the intermodal and other city garages." If the $12 million parking garage had REALLY cost $12 million, instead of $28 to 29 million, it would be payed off and that money would be going into the city coffers instead of paying outrageous fees to the dictators friends.

We NEED to watch this and NOT trust what the dictator and his cronies say. 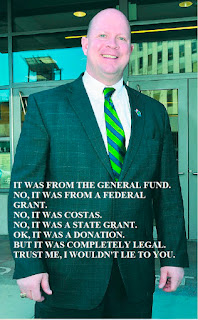 On a different note (not really), our city council is raking in the dough. $20,665 for travel in 2007!!!
I guess I shouldn't be surprised. Tony Thomas, after stiffing Harry's market for $16,000, took a paid 'vacation' with only 1 month left in office. BTW council, how's all that help from Tony Thomas coming? 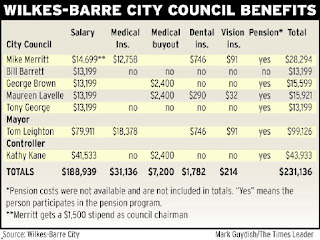 Dan Emplit WBFD
AKA Don Quixote
Posted by WBFF088 at 11:42 PM No comments:

Just wanted to point out that 80 Church Street is in Engine 3's territory. Remember Engine 3 is Leighton's 'part time' Engine. Why is 80 Church street of importance? According to WBRE it was busted as a meth lab.
But don't worry, I'm sure Leighton's $4000 + security system includes smoke and heat detectors, so HE'LL be safe.


Dan Emplit WBFD
AKA Don Quixote
Posted by WBFF088 at 6:14 PM No comments:

Years ago Hurricane Katrina hit Louisiana. Some things people know, some NEVER made the news.

Did you know Venezuela offered tons of food, water, and a million barrels of extra petroleum?

France had a range of aircraft, two naval ships and a hospital ship standing ready in the Caribbean? (Gonna have to lay off making fun of 'the cheese eatin surrender monkeys').

Russia offered four jets with rescuers, equipment, food and medicine, but their help was first declined before later being accepted.

Afghanistan donated $100,000 to the hurricane victims.

Australia donated approximately $7.5 million, and a team of 1,000 emergency response officers. They also donated $20 million to the American Red Cross.

Canada's contribution was way too big for my poor typing skills

Cuba was one of the first countries to offer aid, they offered to send 1,586 doctors and 26 tons of medicine (it was rejected by the State Department). Also, before the 2006 World Baseball Classic, Cuba said they would donate their share of the winnings to Katrina victims to ensure the United States embargo against Cuba was not violated. However, the U.S. government refused to allow the donation.

Now to ruin the mood, I'll get to what I was going to post about.
On September 8, 2005 New Orleans Police Superintendent Eddie Compass to local police, National Guard troops, and US Marshals to confiscate all civilian-held firearms. "No one will be able to be armed," Compass said. "Guns will be taken. Only law enforcement will be allowed to have guns."
This was carried out without warrants, and in some cases with excessive force.
One instance captured on film involved 58 year old New Orleans resident Patricia Konie. She had stayed behind, in her well provisioned home, and had an old revolver for protection. A group of police entered the house, and when she refused to surrender her revolver, she was tackled and it was removed by force. This 58 year old woman's shoulder was fractured, and she was taken into police custody for failing to surrender her firearm.
I thought 'being able to defend yourself' was a RIGHT guaranteed to United States citizens without a criminal record. What did the political hack want her to use against the looters? Harsh language?

Even National Guard troops were used for house to house searches, seizing firearms and attempting to get those remaining in the city to leave.

Why am I going on about this? I was just talking to someone who had a firearm confiscated during Katrina. A shotgun that his father had left him (this needed no paper work to transfer ownership). He still hasn't gotten it back.
So much for our 'rights'. They mean less than some political asshats ambition.

I went to New Fredrick St. during the rain and after 8+ years as the dictator, Leighton still hasn't done squat about the flooding there. Here's a slideshow from September 2010.

And some new pictures from today. 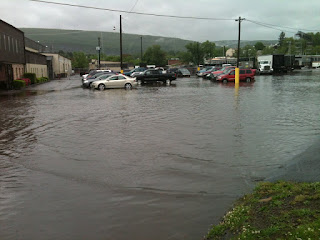 Even though there are several businesses on that street, Leighton doesn't care. If it's not 'HIS' downtown or Barney Farms then it doesn't matter to him. 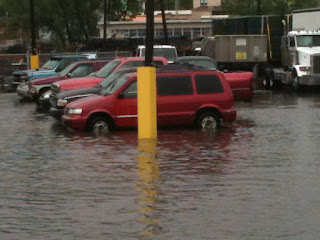 ^ This is a parking lot several feet from the road. What can I say, This is unacceptable. 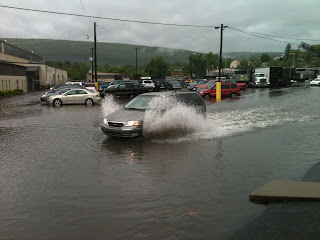 I wonder if Leighton is ignoring the problem because Citywide towing is on this street?

This should runoff into a creek about 30 yards away. But that creek is so overgrown that it backs up. This was supposed to be taken care of back in 2007.
"On Saturday, those elected officials made another pledge to control flooding by replacing every bridge and rebuilding walls and the natural bed channel along the entire length of the creek -- a span of about 5 miles." (Oct 21, 2007) The Times Leader.

We were supposed to get $50 million. $11.2 million went into the rebuilding of the 4 bridges. I STILL haven't found out what happened to the rest of the money. It didn't go into the creeks. Where is the other $38.8 Million?

The Citizens Voice has an article on the Parking fiasco today.
Evidently I'm not alone in questioning this move.
If a company is willing to give $20 million to the city just for the parking rights, They must expect a profit. So why isn't the city looking at how they expect to make said profit and instituting those measures?
I suspect I know why. Dictator Leighton has run the city out of money. It's not a surprise. The $12 million Intermodel center that cost $29 million. The massive cost over runs on the Coal Street raceway. The Ice Rink that is open to the public about 9 hours a week (not to mention the remodeling of the second floor).

I loved this quote from Leighton, "If we find out it's not what's best for the city," he said, "then I won't recommend it." How much money has the city spent on JJ and his brothers company's 'investigating the possibilities' when just a couple of phone calls to the cities that looked into this, and turned it down, Would've shown that it is a TERRIBLE idea.

Now on to the barricades around the Sterling.
This is turning into Leighton's version of McGroarty's streetlight rentals. I mean $5000 a month? There were barricades sitting at DPW. Here's a picture of some of the ones in the worse shape, blocking in the school bus that the city bought and NEVER uses. 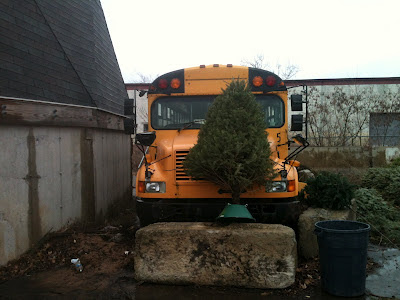 Where are they now? For the price we are paying we could've bought the molds and made our own.
This city NEEDS an independent audit. Since I started this blog, we've found out:
Leighton lied about a $1 million donation.
Leighton lied about why the city bought a specific brand of Fire engine.
Leighton had a $17 million cost OVERRUN on a $12 million parking garage.
Several million dollars spent on JJ Murphy's Hawkeye security cameras, that seldom work.
JJ's $10,000 HOME security system, that the tax payers footed some of the monthly bills for.
Leighton's $4,000 HOME security system (even though the people on the front lines, the Police, don't rate one).
The school bus that goes NOWHERE.
Just off the top of my head.

I feel like going to beat up a windmill. 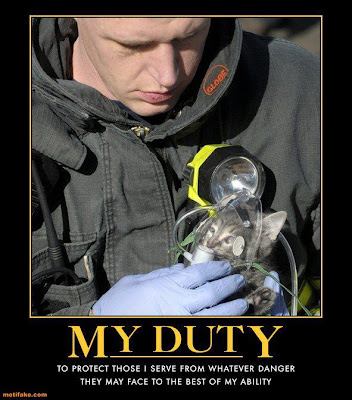 “The role of a firefighter in today’s society – be it urban, rural, natural environment, volunteer, career, industrial, defence force, aviation, motor sport, or other is one of dedication, commitment and sacrifice – no matter what country we reside and work in. In the fire service we fight together against one common enemy – fire – no matter what country we come from, what uniform we wear or what language we speak.”
- Lt JJ Edmondson, 1999

Please take a moment today to think about us. We march into the most dangerous environments, risking all, for you and yours. 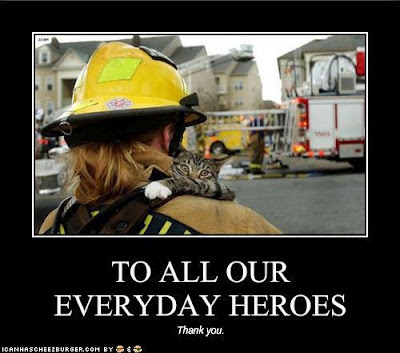