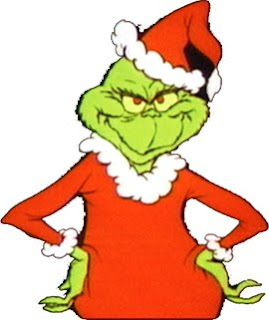 Well, 11 of our best are now wondering what they are going to tell their children on Christmas. That's right, 11 fire fighters have been laid off. Not 1 person in any other department has to worry. Not the second lawyer (The charter only calls for one) that makes $48,247.00. Not Leighton's boy puppet, Drew, who makes $38,682.00. Not one of the city hall people that do NOTHING to save lives.
Oh, and how did the unfortunate Firefighters find out?
The Line Chief had to deliver the letters. Here what they got. 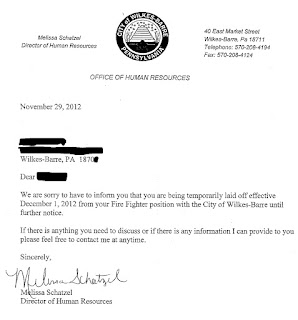 That's it. After the 'King' negotiated a contract extension with us then three weeks later he started screaming that the city had no money. Now MONTHS later, just in time to put pressure on us, lay offs. But ONLY for us. Then he LIED, AGAIN, to the press, "we cannot continue to finance all government services and employee costs without cooperation from the city's unions." After he walked out on them while they made an offer! And this while STILL not giving us any kind of numbers to work with!

To quote another Firefighter, "I haven't felt like this since 9/11 and I saw the towers go down."

Dan Emplit WBFD
AKA Don Quixote
Posted by WBFF088 at 9:22 PM No comments:

If you go to Wake Up Wilkes-Barre you can see the true base salaries of W-B City employees.

A letter from the Fire Dept Union President

I am writing today because recent quotes from the administration are basically laying the whole cost of $2,000,000 budget shortfall on the WBFD.

"Police, public works and other departments also would be affected as the city struggles to make up for an estimated $2 million revenue shortfall this year and reduce the 31 percent property tax increase proposed in the mayor’s $45.8 million balanced budget for 2013."

Leighton said he is “always looking to increase revenue for the city.” He said there are “15 to 20 firefighters worried about their jobs,”

Twenty firefighters amount to over $1.7 million of the $2 million dollar budget deficit.

We have two main questions. The first one, that we have been asking for weeks is, what is the true number the city is looking to layoff? The second is has anyone truly looked into the fire budget as a whole?

The 2013 budget as presented has some major flaws in the public safety portion of the fire budget. Currently the city has budgeted for 61 firefighters for fire suppression, 8 firefighters for uniformed ambulance service, and 3 for administration which includes the fire inspector, training officer, and Chief of the department.

That amounts to a budget that reflects 72 firefighters on the WBFD, which is incorrect. Currently we are down to 64 firefighters. Logic would dictate that if you remove the extra 8 firefighters from the budget, that would take care of $700,000 of the 2013 budget shortfall.

Just a note, the pension numbers and the three administrative firefighters positions cannot be found online. There is a page missing between pages 36 and 37 which details the cost of fire administration total on page 37.

Just to summarize, if the manning numbers are reworked and it is found the cities MMO for the new fire pension is still at $0, you can close more than half of the budget deficit without laying off a single firefighter from our already depleted force.

Throughout the years, we the Wilkes-Barre City Firefighters have always stepped up to help out the city in time of need, and now we are reduced by 24 firefighters ,and are threatened with the loss of 20 more.

At this moment, we are weighing our options as to how to keep the minute number of 64 on the job, when as all the studies show we should be at 88 firefighters at a minimum.

Just yesterday both of our Engine companies and both ambulances were tied up on calls when a dispatch came in for a car fire. An engine company pulled out of an operation to respond to the car fire but it took precious time. I shudder to think what the outcome would have been if it had been a structure fire.

At this time I am asking the administration and city council to look into the other city department budgets and maybe some other savings can be found.

I went to tonight's council meeting. Actually I've made 4 of the last 5 (I think, they get a little mind numbing.)

I get why my union officers have to play nice with our dictator, I really do, They have to negotiate with him and his cronies. I however am NOT a union officer and I DON'T GOTTA.

We had 16 firemen per shift, now 11. Don't forget the Lloyds study said 17 is the minimum for public safety. But don't worry the dictator still has the security system that the public bought. AND WHAT THE HELL IS IT MADE OF PLATINUM?!!! 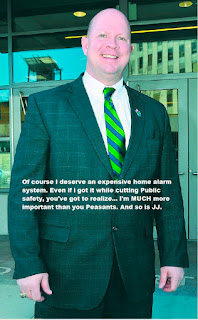 We had 5 engine houses. Gained one, lost 2 and remember that South Station's Engine is only manned about one eighth the time. Oh and before he makes noise about closing it, IT IS THE ONLY FIREHOUSE THAT IS NOT IN THE FLOODPLAIN!!

We got new Engines. That the dictator took credit for them, when it was a generous anonymous donation. 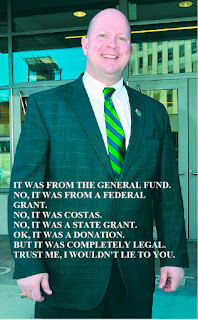 We had 5 Engines and now we have 2 and the part time Engine 3.

He put's our salaries out to the press, but doesn't tell them that the numbers are artificially inflated by judgments that he illegally hid money that was rightfully ours for years (honestly, when he became mayor, if he had asked for this money, We would have given it to him) or that it included overtime THAT HE CREATED by not having enough firefighters to cover the shifts.
He has demonized us at almost every turn and blames anyone else for the mess he has created. 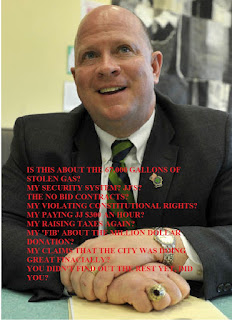 When the mayor was elected he asked all the city unions to help the city financially in their contracts. Only the fire union did (concessions = approx 4.5 million dollars over 9 years). Mayor Leighton said "By making (these) substantial concessions, the firefighters' union has agreed to become partners with the city in its revitalization plan"
We've done OUR part. HE hasn't done his. And now he will risk our lives and yours, because of his pet projects and friends (JJ and the whole $300 an hour). But he thinks we ,the taxpayers, owe him. Proof? Why hasn't he payed us back for the security system? Why hasn't he taken a pay cut? He's the fourth highest salaried mayor in the state. And that doesn't include the fuel he helped himself to. 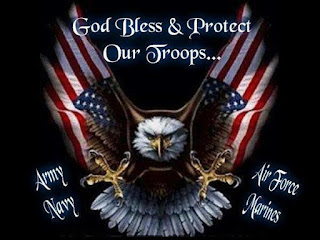 God Bless and Protect our men and women in uniform.