Is this MORON the best VP candidate the Libertarian party can come up with?
The definition of 'Weapon of Mass Destruction' (WMD) is Nuclear, Biological and Chemical weapons.
So, yes WMDs WERE found in Iraq.
"From 2004 to 2011, American and American-trained Iraqi troops repeatedly encountered, and on at least six occasions were wounded by, chemical weapons remaining from years earlier in Saddam Hussein’s rule.

In all, American troops secretly reported finding roughly 5,000 chemical warheads, shells or aviation bombs, according to interviews with dozens of participants, Iraqi and American officials, and heavily redacted intelligence documents obtained under the Freedom of Information Act."
But that is NOT my point. This complete idiot thinks that any rifle with more than 5 rounds is 'essentially' equal to a NUCLEAR WARHEAD!
So this 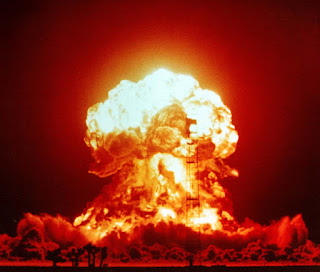 SIGH.........
“The five-shot rifle, that’s a standard military rifle; the problem is if you attach a clip to it so it can fire more shells and if you remove the pin so that it becomes an automatic weapon, and those are independent criminal offenses,” Weld said. “That is when they become, essentially, a weapon of mass destruction. The problem with handguns probably is even worse than the problem of the AR15.”
Now, let's look at the other stupidity in this statement.
The US military hasn't had a 5 shot rifle since 1936, when the M1 Garand (which had an 8 round magazine) replaced the 1903 Springfield. So, No 5 shot rifle has been used by the military in 80 YEARS!
BTW, Clips feed magazines, Magazines feed weapons. From Wikipedia:
"A clip is a device that is used to store multiple rounds of ammunition together as a unit, ready for insertion into the magazine or cylinder of a firearm. This speeds up the process of loading and reloading the firearm as several rounds can be loaded at once, rather than one round being loaded at a time."

Now,I'm not really a 'term Nazi' for most people, but if you are a politician then GET IT RIGHT!

And then he has to outdo his previous stupidity. "if you remove the pin so that it becomes an automatic weapon".
WHAT @#$%ING PIN IS THIS MENTAL MIDGET TALKING ABOUT?
I've built several AR's and I have no CLUE what 'Pin' he is talking about, and honestly neither does he.
Voting for people like this, politicians who talk about things that they know NOTHING about, is willful retardation at it's finest.