The passing of Common Sense

Today we mourn the passing of a beloved old friend, Common Sense, who has been with us for many years. No one knows for sure how old he was since his birth records were long ago lost in bureaucratic red tape.
He will be remembered for having cultivated such valuable lessons as: knowing when to come in out of the rain, why the early bird gets the worm, life isn't always fair, and maybe it was my fault.
Common Sense lived by simple, sound financial policies (don't spend more than you can earn) and reliable strategies (adults, not children, are in charge). His health began to deteriorate rapidly when well-intentioned but overbearing regulations were set in place. Reports of a 6-year-old boy charged with sexual harassment for kissing a classmate, teens suspended from school for using mouthwash after lunch, and a teacher fired for reprimanding an unruly student only worsened his condition.
Common Sense lost ground when parents attacked teachers for doing the job that they themselves had failed to do in disciplining their unruly children. It declined even further when schools were required to get parental consent to administer Calpol, sun lotion, or a band-aid to a student, but could not inform parents when a student became pregnant and wanted to have an abortion.
Common Sense lost the will to live as the Ten Commandments became contraband, churches became businesses, and criminals received better treatment than their victims.
Common Sense took a beating when you couldn't defend yourself from a burglar in your own home and the burglar could sue you for assault.
Common Sense finally gave up the will to live after a woman failed to realize that a steaming cup of coffee was hot. She spilled a little in her lap and was promptly awarded a huge settlement.
Common Sense was preceded in death by his parents Truth and Trust, his wife Discretion, his daughter Responsibility, and his son Reason.
He is survived by his 3 stepbrothers I Know My Rights, Someone Else Is To Blame, and I'm A Victim. Not many attended his funeral because so few realized he was gone. If you still remember him, pass this on. If not, join the majority and do nothing.

Once again I'm here listing the absolute stupidity that the writers of the Walking Dead push on us.

1. E02 When are these people going to do things the SMART way.
They could have killed most of the wet basement walkers from safety by strapping a knife to a stick and stabbing them from the main floor. Primitive people figured out stabbing people with a spear, so the danger is kept far away from you, is a good idea.
These people aren't as smart as primitive people.

2. E03 Having basically a loud party with no windows boarded up or covered and hundreds of candles burning.... Did Daryl learn NOTHING from the Funeral home last season?

3. E04 Lets tie a bunch of bed sheets together and we'll go down the elevator shaft that leads into the pit of walkers. I'm sure we'll be okay because for some reason they won't be anywhere near the pile of bodies at the bottom even though that's their constant source of food.
I'm Sure THAT carefully laid out plan can't go wrong. 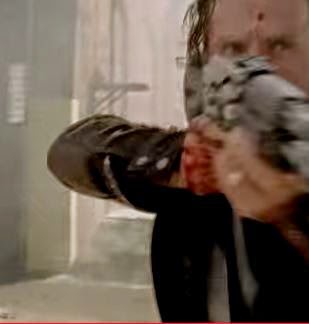 BTW Rick who the !@#$ shoulders a weapon like that?

4. E04 Beth getting every head shot in dead accurate fashion even though its pitch black and while she is wearing a cast on her dominant hand (preventing her from getting a proper grip) and firing one handed.

5. E04 You don't even know if the doors to outside are unlocked down there!

6. E04 I'm sure you won't be seen working our way through all the walkers that hang around outside so no need to leave at a time that those snipers on the roof would have a harder time seeing you.

8. E05 How does glass damaging a fuel line cause the short bus go out of control? The fuel lines have nothing to do with steering. 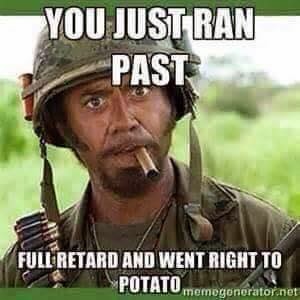 10. E07 Why go to the hospital? All the cops have radios. They wouldn't be carrying them if they didn't have someone listening.
If Rick used the radio to call that Dawn chick, he could negotiate with less risk, plus he could easily prove he actually has their people by having one of them talk to her.

11. E08 How did someone manage to draw/shoot a holstered gun within a millisecond of being stabbed? I know people that practice this and no way do you clear leather that fast. Add to that, the head shot? Really? In that situation you would put several in the chest. It's faster and an easier target, plus it may stop the attacker from stabbing you A SECOND TIME.

12 E08 Why the hell would Beth stab the (Right handed) cop in the left shoulder? With a pair of surgical scissors no less. The scissors were too lame a weapon to truly hurt Dawn, but it was too extreme an action not to draw a reaction.
It's not like that would be debilitating. What did she think was going to happen? The cop would HAVE to think that it was the opening for a life threatening attack and act accordingly.

13. E09 Tyreese, don't stare at a picture while in an UNSECURED/UNCLEARED building.

14. E09 Obviously, Hershel never taught Rick, Glenn or Michonne how to make a tourniquet. I mean, grade school children know how, so it's probably WAY to complicated for these morons.

15. E13 Why the HELL would you steal guns from the incompetently run armory, sneak them outside then sneak them back inside? Just leave the ones you want to keep inside, wait for it, INSIDE!

16. E14 Glenn, when you find a large number of walkers, or even just one, like behind a secure fenced in area, kill them before moving on.

17. E14 Grenades do NOT go off just because they've been shot.

18. E14 When did they start making grenades that throw people about 6 to 10 feet (the only way dumbass could have been impaled that badly) but otherwise leave them unharmed? Grenades work by throwing shrapnel, NOT explosive force.

19. E16 Daryl, you've been surviving in the ZPAW for, what, 4 years (?). By DAY 4 I know I would knock on doors (and such) before opening them, but YOU just go to open the truck up without even listening to the door. 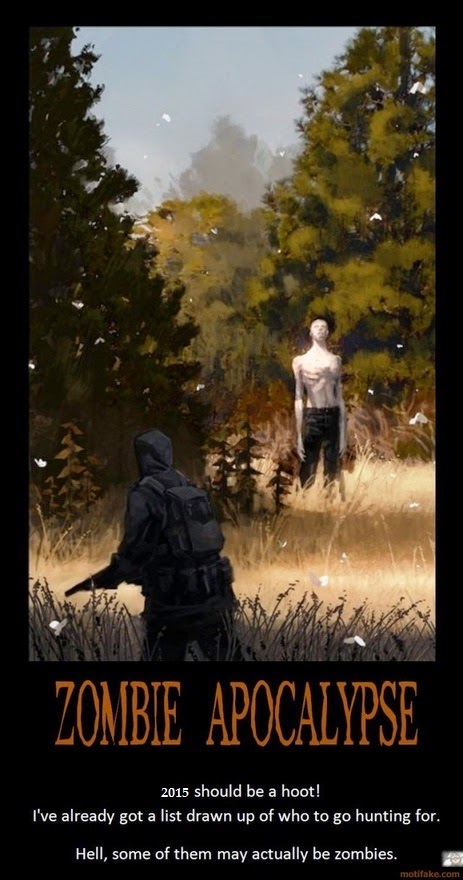 20.   E16 Morgan just waded into 50+ walkers and saves the day, instead of
1. leading some off
2. killing them
3. going back
4. lather, rinse, repeat
until the numbers were actually manageable. (I won't say he should have shot them, we don't know if he has ammo)

21. E16 Great wall at Alexandria, no one was at the gate to unlock it when Aaron, Daryl and Morgan showed up and it kept them out, NOT.

22. E15 What also doesn't make sense is Aaron and Daryl see the light from the camp at night, but don't hear someone get dismembered and another tied to a tree and tortured.


On a side note, I think that the ONLY one with an IQ point is Carol 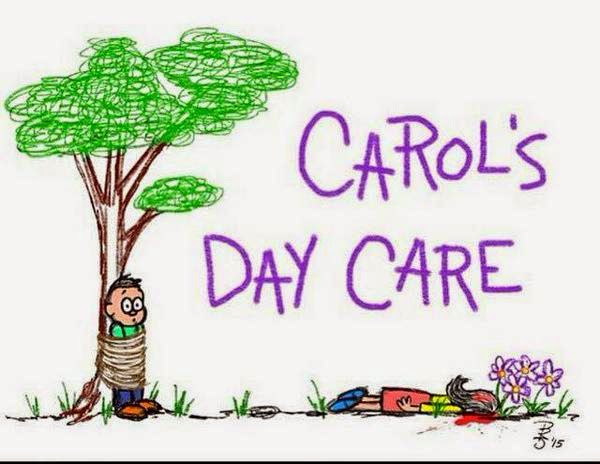 "SIR, I WILL NOT OBEY THAT ORDER."

I've been hearing similar complaints. I would NOT obey that order. It is not legal.
What a soldier or sailor has in their PRIVATE home, as long as it is legal, is none or the governments business. But telling a lie about what you have there IS a punishable offence.

Our military should not be about political correctness, it should remain an arm of the government dedicated to keeping us safe from threats and attacks from other countries.

Why isn't there a media storm about THIS murder?

These 'fine' young men, at the young age of 15 (plus a 14 year old), decided that playing basketball was too boring.

They decided to rob someone. It was NOT the first time they had done so, they BOTH have arrest records for robbery.
They profiled their victim, passing on a younger man walking a large dog and picked James Stuhlman. 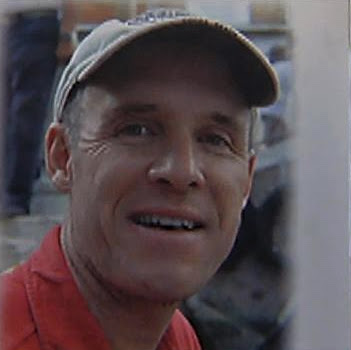 Here is what I've been able to decipher.
These 'fine young men' shot Mr. Stuhlman in the leg to ensure compliance. Then because he wasn't carrying any money, they shot him in the chest. DESPITE his pleading, "Please Don't Shoot me, Please Don't Shoot me".

How do we know what happened? Why because these 'fine young men' BRAGGED about it in the confessions they gave the police. Oh, and this happened in Overbrook, Pa.
Would the story have been differant if Mr Stuhlman had been armed? No way of knowing, but you can know, if he had been, that it would have given him a chance.
This is why I hate the media, They only care about ratings and their agenda.

Do NOT watch this video If you are .... squeamish. It doesn't show anything, but the audio is gut wrenching.

So some morons think our Warriors go on "Killing Sprees"??!!

The title was no joke. Some morons (liberals actually) think that people like Chris Kyle, who was the main focus of American Sniper, was a bigot and he (and all the rest of our military) go on "killing sprees".

NBC foreign correspondent Ayman Mohyeldin calls Chris Kyle a "racist" and claims that the MILITARY MISSIONS were "killing sprees." Now I'm sorry (NO I'm NOT), but the only real way to win a war is to kill the bad guys (that would be them, Mr. Mohyeldin) and protect the good guys (and that would be US).

If you were open minded (or intelligent) Mr. Mohyeldin, you would realize that if the bad guys (that would be them) are from 'local' nations, then a warrior will be killing people from that area. That's not racism! That's reality!

It's OK to be anti-war. It's OK to be liberal. It's OK to like Obama. It is NOT OK to tear down men and women who are willing to DIE for your rights. ESPECIALLY when you NEVER served and make a living using a right that they are there to defend.

Just so you know Mr. Mohyeldin, the military does NOT have the right to refuse an order (unless that order is illegal). So if you have a problem with the war, complain about the people in charge, don't tell lies about a warrior in the war.

If MSNBC wants to point at racists, how about pointing out that Islamic terrorists/extremists want to kill anyone not Islamic. And not their version of Islam. And anyone Jewish. And children for some reason. And anyone with a view that is not EXACTLY the same as theirs.  And it oppress women. In case you missed the hint. These Islamic terrorists/extremists.... ARE RACIST and BIGOTED.

As much as extreme Liberals would like everyone to join in their belief that Chris Kyle was some sort of blood thirsty, bigoted monster, He was not. He was an extremely skilled warrior and a man. A man with flaws? Yes (who doesn't have them?). But those flaws are what makes him, and all who serve, Heroic.

Now I rarely watch MSNBC for a reason. Mainly because they are idiots.

This is a great demonstration of why you should vaccinate your children.