Our Narcissist-in-Chief is the best gun salesman EVER.

Dear Valued Customer,
In the spring of ‘77, I left the Air Force and moved to Columbia, MO to pursue my dream of running a gun shop. You see, I’d always loved the outdoors; especially shooting and hunting. Some of my fondest childhood memories involve shooting and hunting with my dad and brothers. Then, as an adult, some of my greatest joys have come while shooting and hunting with my wife, my kids, my friends and now my grandkids. I love this industry, I love our way of life and I love serving Customers.
Now, our way of life is being challenged like never before and our Customers are responding with a flood of orders. In the 35 years I’ve been in business, I’ve never seen anything like this.
We’re monitoring the political environment, our industry’s capabilities and our business on a daily basis and making policy and process changes to better serve Customers. But please understand, while we’re still able to get most orders out the same day they’re placed, you may experience longer than normal wait times on the phone or when you chat with us on the web. Also, it’s taking us a few extra days to respond to emails. Finally, we’re out of a bunch of products I know you want which breaks my heart. And when we do get them in, they rarely spend the night in the building because they’re ordered almost immediately. We’re tirelessly working to get products in the door and out to Customers as fast as we can. But, until supply catches up with demand, we’re having to limit quantities and backorders on certain products.
One thing we haven’t done is change our prices because of this surge in demand. Prices do change from time to time as they always have, but we’d never change prices because of something like this. Our pricing strategy is one of the reasons we’ve put quantity limits on certain products. We’ve all seen certain products selling two or three times higher than normal, and MidwayUSA doesn’t want to enable that type of activity. Also, we want to serve as many Customers as possible when we receive high-demand products. If it’s any consolation, none of our Employees can order products with quantity limits (myself included). We’ve all agreed to put Customers first. And that’s the way it’ll always be at MidwayUSA.
As always, everything we do is intended to be in the best interest of our Customers and we’re eternally grateful for your patience and loyalty.
Thanks for Your Business!

Very interesting and worth the time to watch.

Status of the Gun & Ammo industry

"Smith & Wesson-is running at Full capacity making 300+ guns/day-mainly M&P pistols. They are unable to produce any more guns to help with the shortages.

DPMS: Can't get enough parts to produce any more product.

Springfield Armory: Only company who can meet demand but are running 30-45 days behind.

AMMO: Every caliber is now Allocated! We are looking at a nation wide shortage of all calibers over the next 9 months. All plants are producing as much ammo as possible w/ of 1 BILLION rounds produced weekly. Most is military followed by L.E. and civilians are third in line.

MAGPUL is behind 1 MILLION mags, do not expect any large quantities of magpul anytime soon.

RELOADERS... ALL Remington, Winchester, CCI & Federal primers are going to ammo FIRST. There are no extra's for reloading purposes... it could be 6-9 months before things get caught up. Sorry for the bleak news, but now we know what to expect in the coming months. Stay tuned, we'll keep you posted..." 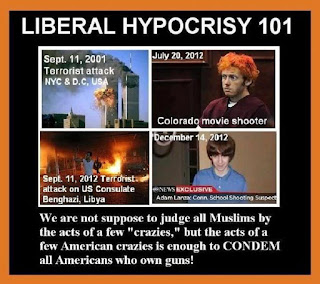 Obama has done more for individual gun ownership in 4 years than the NRA has in 20.

I've been told if you watch the entire video there is an AR in it.
I'm on my third time watching it and I haven't seen it.

Sorry but It's covered by the First Amendment

The White House released this picture to show how 'pro gun' the Prez is. 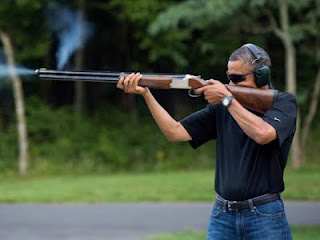 And of course it didn't take long for the photo shops to start. 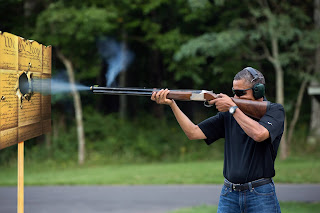 BTW, I think this is accurate.^

But they also came out with this:

This official White House photograph is being made available only for publication by news organizations and/or for personal use printing by the subject(s) of the photograph. The photograph may not be manipulated in any way and may not be used in commercial or political materials, advertisements, emails, products, promotions that in any way suggests approval or endorsement of the President, the First Family, or the White House.

Right, this 'Warning' that we can't photo shop the picture. Sorry, Barry, but It's covered by the First Amendment.

First off, don't look down at this because it's animated. This film matches or beats the best live action films.
It's based on (and closely follows) the highly praised graphic novel of the same name. This series is credited with saving Batman from the 1960s TV series campyness.
It is in two parts, Watch both. One after the other. 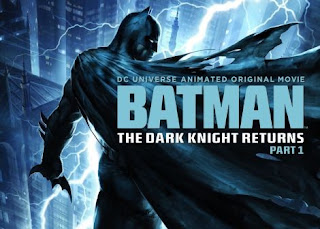 Premise:
It's been about 10 years since Batman has retired (the other heroes quit before him, except Superman who became a tool for national policy), Batman retired after the death of the second Robin Jason Todd. But Wayne (55 years old) is chaffing in his retirement.
A gang called 'the Mutants' has overrun Gotham which is having record levels of crime.
Jim Gordan is retiring in a few days.
It is set during the Reagan administration.

Events:
Of course Batman comes out of retirement.
He struggles with the physical exertions.
He takes on the leader of the Mutants and loses.
He gains a new Robin, a Girl Named Carrie Kelley.
He realizes that Batman is more than just physical abilities and goes after the Mutant leader again.

The Joker seeing the news reports of Batman's return goes on a killing spree forcing a showdown.
After the highly publicized battle, the government sends Superman to make Batman back down. Batman doesn't back down.
PS Batman cheats. 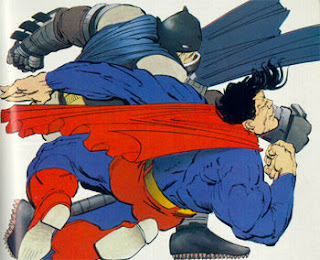 And
Batman (Fighting the Mutant Leader): You don't get it, boy. This isn't a mudhole... It's an operating table. And I'm the surgeon.
Batman breaks the Mutant leaders leg.
Batman (internal monologue): Something tells me to stop with the leg. I don't listen to it.

Proof That Cats Are Better Than Dogs